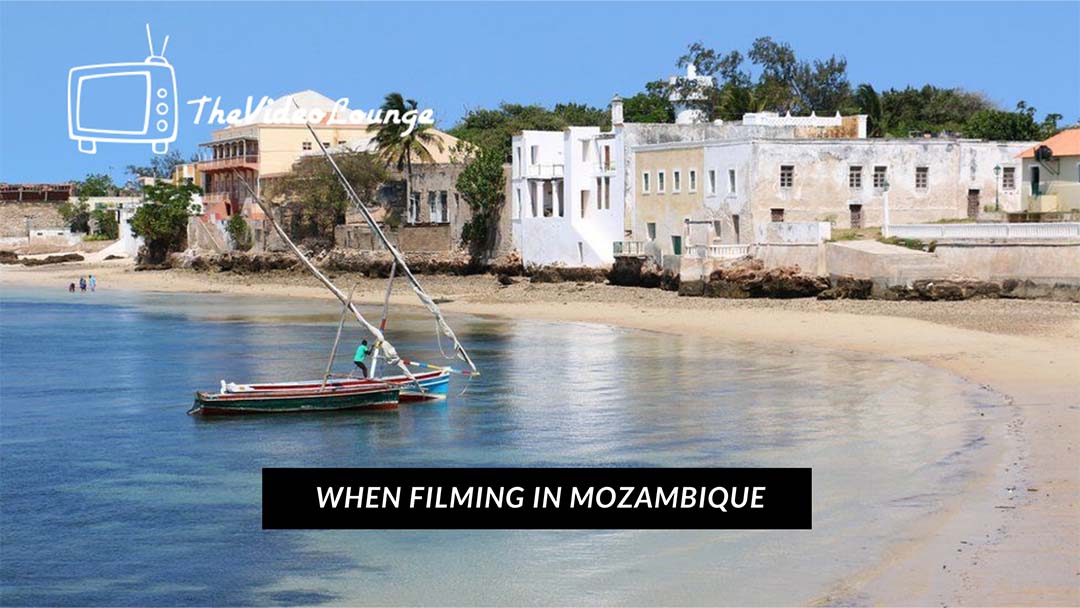 When Filming in Mozambique

WHAT OUR LOCAL FILM FIXERS HAVE TO SAY ABOUT FILMING IN MOZAMBIQUE, AFRICA

Mozambique is located on the southeast coast of Africa. It is bound by Eswatini to the south, South Africa to the southwest, Zimbabwe to the west, Zambia and Malawi to the northwest, Tanzania to the north and the Indian Ocean to the east.

The climate in most of Mozambique is tropical and warm with a dry, cooler season from May until October and a wet, hot season from November until April.  The dry and relatively cool winter months between May and October is the best time for film in the region.

Portuguese is the country’s official language, but it is only spoken by around half of the population. The other most spoken primary languages in Mozambique, include: Makhuwa, Changana, Nyanja, Ndau, Sena, Chwabo, and Tswa. English is generally spoken in hotels and beach lodges.

Infrastructure in Mozambique is significantly underdeveloped compared to all other countries of the world. Of its approximate 30,400 kilometers of highway roads, only 18 percent are paved, the rest remaining dangerous and even impassable in certain weather conditions. Taxis are now found in many Mozambique cities. Maputo cabs work on a flat rate. If you’re planning on renting a car especially in rural areas, getting a 4×4 is highly recommended due to the poor state of the country’s roads. Bus travel is cheap, reliable and on time.

Most visits to Mozambique are trouble-free, but street crime is common in Maputo and increasing in other cities. Some visitors to Mozambique report being victims of police harassment, including robbery, or requests for bribes.

There is currently no tax incentives and rebates available to film in Mozambique.

WHAT OUR FILM FIXERS HAVE TO SAY ABOUT FILM LOCATIONS IN MOZAMBIQUE, AFRICA

In the south region we have the provinces of Gaza, Inhambane, Maputo City, and Maputo.

The natural landscapes around Goba were filmed for Blood Diamond (2006).

The Central region have rolling savannah and grassy hills and is home to lions, elephants, hippos, zebras, buffalos, wildebeests, waterbucks and waterbirds.

The Zambezi River, Lake Cahora Bassa, created by the Cahora Bassa Dam, Macuti Lighthouse and the Chimanimani National Reserve are also found in this region.

Cabo Delgado, Nampula, Niassa, and Zambezia are in in the north. This regions known for its paradise islands, mangrove forests, idyllic beaches, and rich coral reefs. A protected National Marine Park, it consists of both coast and inland areas and is home to everything from elephants to dugongs, to barrier islands and coral reefs

Notable buildings include Fort São Sebastião, Fortim Igreja de Santo Antonio, and the Chapel of Nossa Senhora de Baluarte. Baixo do Pinda is a lighthouse near Memba. There is also a lighthouse on Goa Island.

The Manda Wilderness is located on Lake Malawi.

WHAT OUR LOCAL FILM FIXERS HAVE TO SAY ABOUT FILM PERMIT ,VISAS AND WORK PERMITS WHEN FILMING IN MOZAMBIQUE, AFRICA

Most visitors to Mozambique unless they come from one of the visa exempt countries can obtain a visa on arrival at all border posts or from one of the Mozambican diplomatic missions. The processing time for all types of visa is 10 working days for normal processing and 3 working days for urgent processing. If the applicant has been in a Yellow Fever endemic country, he must present a Vaccination Certificate, both at the Embassy and at the entry border post.

WHAT OUR LOCAL FILM FIXERS HAVE TO SAY ABOUT FILM CREWS,EQUIPMENT AND TALENT  IN THE MOZAMBIQUE, AFRICA

Mozambique has a very small pool of local crew, all HOD’s should be brought in from South Africa or abroad

There is a limited amount of film gear available locally. Everything else must be brought in from South Africa or abroad.

Portuguese is the official language.

The Makua are the largest ethnic group and are dominant in the north of Mozambique. The Sena and Shona are prominent in the Zambezi valley. The Shangaan dominate southern Mozambique. Other groups include the Makonde, Yao, Swahili, Tonga, Chopi, and Nguni. Some Portuguese and Indian looks are also available. All other talent needs to be brought in from abroad.

About The Video Lounge

We are an energetic, innovative and pioneering production and post-production company that delivers exceptional work that is always beyond expectation and always on Budget.